Get a fast & free estimate today.

10 Things You Didn’t Know About Spiders 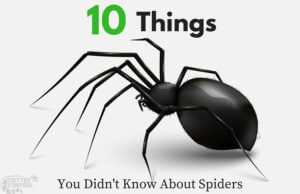 You see them all the time and they come in many different colors and sizes. Some are hairy, some are smooth, some have eight eyes, some have two, and the list goes on. They are often feared because they aren’t understood. In fact, of the 3,400 species found in North America, only two have venom strong enough to harm a human. What are we talking about you may ask? We are talking about spiders. The creepy crawlers with 8 legs that we have grown to not love so much. Below are a list of things that aren’t generally known about spiders which will help you get to know and love them a bit more:

1) Spiders are found everywhere in the world except Antarctica.

2) All spiders have venom, but only a few are harmful to humans because their venom is very weak.

3) Spiders are a very important part of our ecosystem. They eat harmful insects, and like bees, they pollinate plants. They are also food for many birds and fish.

4) Spider webs are composed of spider silk. Spider silk is the strongest fiber known to man. It is proven to be stronger than a strand of steel with the same thickness.

5) Spiders release and spread an electrically conducive glue across their web that makes the web spring towards its prey.

6) Web weaving spiders don’t get stuck to their webs because they have an oily substance on their body to prevent this from happening.

8) Hundreds of years ago, people put spider webs on their wounds to stop the bleeding. Scientists have discovered that the silk contains vitamin K, which helps reduce bleeding.

9) Spiders have blue blood. The oxygen in their blood is bound to hemocyanin, which contains copper rather than the iron in humans and makes the spider’s blood blue.

10) Spiders don’t cause bumps or rashes on humans because they don’t feed on human blood. They bite humans when they feel threatened.

Spiders may not be our favorites, but they are indeed fascinating. However, we must still be mindful that some spiders can cause us harm.

If you aren’t sure if a spider in or around your home presents a danger to your family, Call Critter Control® @ 888-617-5764 for your free home inspection today.